In addition to the Halloween  "Guess What's Gross" game I made for a party back in 2010, I made another game too.  I completely forgot about it until I was looking through old photos.  This game was easier to make and probably more fun.  We had some amusing and interesting conversations as a result. 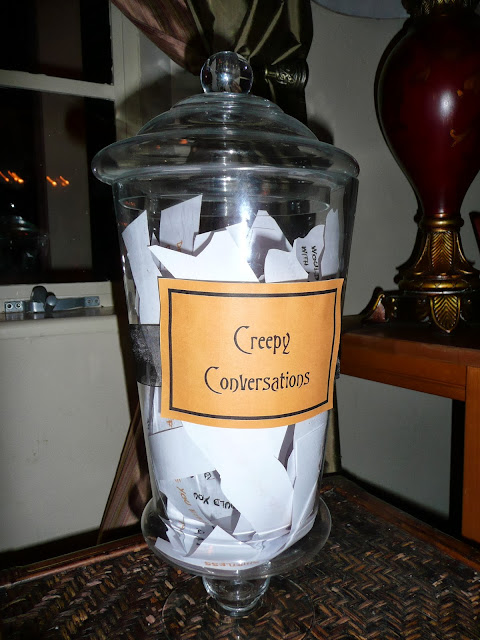 To make it, I just got a big jar and created the "Creepy Conversations" label for the front.  Inside were typed questions on little sheets of paper.  The questions ranged from silly, to morbid, to serious.  To play the game, I picked questions from the jar and read them aloud.  Then we went around the room taking turns answering.  I can't remember all of the questions, but some of them were:


As I said, some questions were kind of silly but others were really morbid or serious.  Anyway, it was a fun party game.  And a good one if you're worried about lulls in conversation.

I didn't do any other games, but did have a costume contest with prizes.  I made this little sign and typed-up ballots . . . 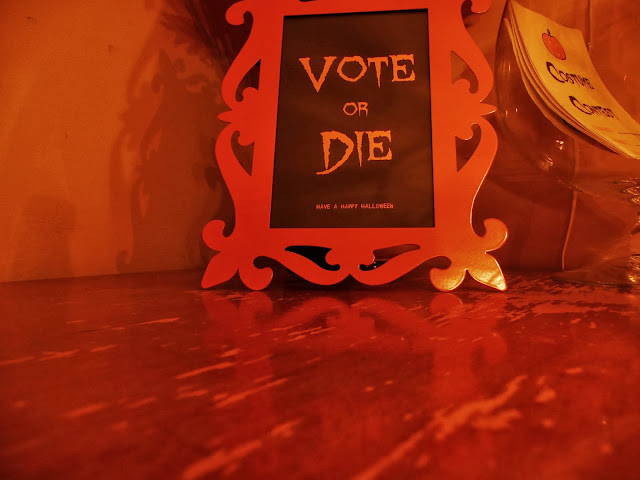 I had no intention of having a Halloween party this year.  That is, until I started writing these last two posts.  That inspired me.  Now I'm all gung ho about it.  I don't have time to put together a big shindig, so I just invited a couple girlfriends over for a "Witches Dinner".  More on that later.  I'm still working on it.
Posted by Mary

Email ThisBlogThis!Share to TwitterShare to FacebookShare to Pinterest
Labels: Costume Contest, Creepy Conversations, Halloween Game, Would You Rather

Hi! I'm Mary and this blog features some of my silly whims. These whims usually involve theme parties, crafting, holidays, decorating, and more. I will try to offer creative ideas and how-to's as often as possible. Thanks for reading and indulging my silly whims.